Home » About Us » About ISER

ISER was founded in 1954 as a research institute attached to the Faculty of Economics and in 1966 become independent of the faculty. Since its inception, ISER has employed first-rate researchers and has conducted internationally recognized research in modern economics. In 2004, ISER was reorganized into three divisions: Economic Theory, Empirical Economics and Policy Studies.

ISER faculty members engage in both theoretical and empirical research on a wide variety of topics ranging from microeconomics, macroeconomics, international finance, and experimental economics to problems facing Japan such as the recession, the financial crisis, the environment, and an aging society. A newly created Research Center for Behavioral Economics affiliated with ISER aims to become the first hub of research in behavioral economics in Japan.

ISER edits and publishes the International Economic Review, one of the most highly ranked scholarly journals of economics in the world, in conjunction with the Department of Economics of the University of Pennsylvania.

ISER maintains close ties with the international academic community, including Hong Kong University of Science and Technology and Southern Illinois University at Carbondale, with which academic exchange agreements ware signed, and conducts joint research with many overseas researchers. 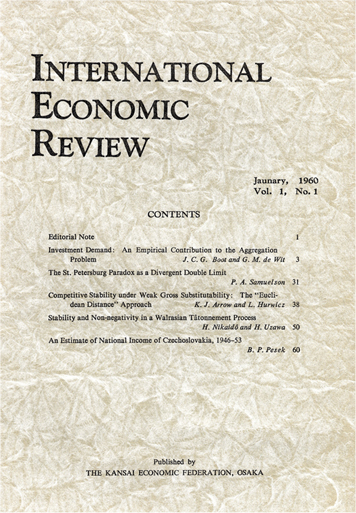